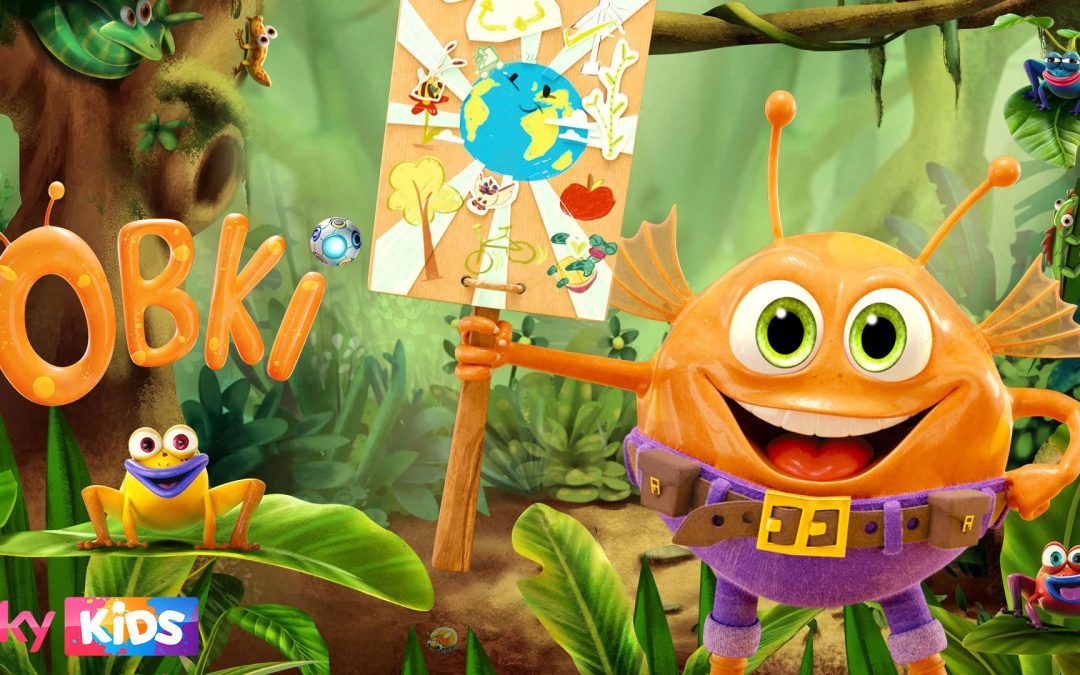 Sky Kids have announced a brand new Sky Original TV series Obki. The animated series will feature the original character Obki, a loveable alien, on his journey to be a positive force for good on Earth. The show is available now on Sky Kids on demand for customers across the UK and ROI.

Airing ahead of COP26, the UN Climate Change Conference later this year, the show will explore issues around climate change in an informative and entertaining way for 5–9-year-old children through Obki’s adventures with his friend, the Orb. This new series is a collaboration with Sky Zero – Sky’s campaign to be net zero carbon by 2030 and commitment to encourage its customers to #GoZero, by using its content and channels to raise awareness of the climate crisis and inspire viewers with actions they can take to protect the planet.

Lucy Murphy, Director of Kids Content, Sky, said: “We’re delighted to work with Obki Productions to bring this critical message to children. The next generation will inherit the world we leave behind – together we can educate and empower them to make positive choices that help to protect the future of our planet.”

Fiona Ball, Director Bigger Picture, Sky, said: “At Sky we believe in better which is why we have committed to being net zero carbon by 2030 and to use our platforms to inspire meaningful change. Obki will positively engage and influence children’s’ behaviour and increase their understanding of what they can do to help tackle the climate crisis.”

Through Sky Zero, Sky is on a mission to deliver meaningful and actionable change to help preserve our world. As one of Europe’s leading broadcasters, Sky believes it has a responsibility to use its reach and voice to help drive important behavioural changes when it comes to the environment. Through the power of its platforms, television content and products, Sky is helping its millions of customers better understand and reduce their carbon footprint.

Amanda Evans, Founder, Obki Productions, said: “We are thrilled to be producing our first ever kids TV series on such an important subject and proud to be working with Sky which has been such an enthusiastic and collaborative partner.”

Since 2019, all Sky Originals in the UK have been CarbonNeutral®, and earlier this year Sky published its new Sustainable Production Principles; clear, industry-leading guidelines that will help all its future productions across original drama, comedy and more achieve albert sustainable production certification.

Sky has also introduced a new Planet Test to make sure all its production, editorial and commissioning teams across Sky and Sky Studios actively consider the environment and champion sustainability on screen and off. This focuses on three areas; raising the issues, showing action and using content to raise awareness.

As well as these commitments, building work is well underway for the new Sky Studios Elstree which aims to be the world’s most sustainable film and TV production studios when it opens next year.

Sky is Europe’s leading media and entertainment company and is proud to be part of the Comcast group. Across six countries, we connect our 23.4 million customers to the best entertainment, sports, news and arts including our own award-winning original content.

Our technology, including the market leading Sky Q, connects people to everything they love – with entertainment from Sky TV, Netflix, Disney+, Amazon Prime Video and BBC iPlayer, and apps like Spotify, YouTube, BBC Sounds, Highbrow, Peloton, Fiit, and more, in one place, easy. Our streaming service NOW brings viewers all the enjoyment of Sky with the flexibility of a contract-free service. Through our new B2B broadband provider, Sky Connect, we offer superfast broadband with business-grade 4G back-up to small businesses in the UK.

Building on the success of Sky Originals like Chernobyl, Gangs of London and Brassic, we are doubling our investment in original content by 2024 through Sky Studios. Sky News provides impartial and trustworthy journalism for free, Sky Arts is the UK’s only dedicated free-to-air arts channel making the arts accessible for everyone and Sky Sports, our leading sports broadcasting service, brings customers some of the biggest and best global sporting events from the Premier League to Formula 1 and everything in-between. Our new TV and movie studio, Sky Studios Elstree, which will open in 2022, is expected to create over 2,000 new jobs and generate an additional £3 billion of production investment in the UK over the first five years.

We believe that we can be a force for good in the communities in which we operate. We’re committed to being Europe’s first net zero carbon entertainment company by 2030 and we’re proud to be a Principal Partner and Media Partner of COP26. We take pride in our approach to diversity and inclusion: we’ve been recognised by The Times and Stonewall for our commitment to diversity and we’ve set ambitious 2025 targets to continue to increase diversity and representation.  We’re also committed to investing £30million across our markets over three years to improve our approach to diversity and inclusion, and to tackle racial injustice.

We use cookies on our website to give you the most relevant experience by remembering your preferences and repeat visits. By clicking “Accept All”, you consent to the use of ALL the cookies. However, you may visit "Cookie Settings" to provide a controlled consent.
Cookie SettingsAccept All
Manage consent

This website uses cookies to improve your experience while you navigate through the website. Out of these, the cookies that are categorized as necessary are stored on your browser as they are essential for the working of basic functionalities of the website. We also use third-party cookies that help us analyze and understand how you use this website. These cookies will be stored in your browser only with your consent. You also have the option to opt-out of these cookies. But opting out of some of these cookies may affect your browsing experience.
Necessary Always Enabled
Necessary cookies are absolutely essential for the website to function properly. These cookies ensure basic functionalities and security features of the website, anonymously.
Functional
Functional cookies help to perform certain functionalities like sharing the content of the website on social media platforms, collect feedbacks, and other third-party features.
Performance
Performance cookies are used to understand and analyze the key performance indexes of the website which helps in delivering a better user experience for the visitors.
Analytics
Analytical cookies are used to understand how visitors interact with the website. These cookies help provide information on metrics the number of visitors, bounce rate, traffic source, etc.
Advertisement
Advertisement cookies are used to provide visitors with relevant ads and marketing campaigns. These cookies track visitors across websites and collect information to provide customized ads.
Others
Other uncategorized cookies are those that are being analyzed and have not been classified into a category as yet.
SAVE & ACCEPT
Powered by